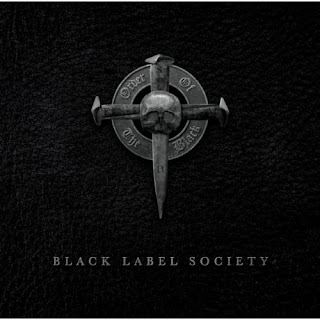 Order Of The Black is Black Label Society's eleventh release since their debut, Sonic Brew, was released in Japan in 1998 (followed by the rest of the world the next year). That output consists of eight studio albums, two compilations, and one live release. One need not be a math whiz to quickly figure out that that's pretty much one album a year, which is almost unheard of in the modern music era. On top of that, BLS leader Zakk Wylde was also maintaining a busy career as the guitarist and co-songwriter with the man who discovered him, Ozzy Osbourne. Osbourne may have only put out two albums during that period (the disappointing Down To Earth and Black Rain), but he toured regularly with his Ozzfest festival.

In 2009, Osbourne announced he'd be looking for a new guitarist, citing the main reason as a concern that his own music was starting to sound too much like that of Wylde's band. The departure was poorly handled by Osbourne, whose Swiss cheese brain apparently failed to compute that he should have communicated directly with Wylde about it instead of doing so through the media. Wylde also experienced a couple of major losses in his life over the past year or so: the death of his father and the death of his drinking life. A notorious boozer, Wylde started experiencing blood clots, with the only remedy being to quit consuming alcohol. Despite his recent obstacles, he remains amazingly positive about life, as evidenced by a recent candid (and typically profane) interview he did with Sun Media here. And the exit from Ozzy's band seems to have benefited both camps: Scream, Osbourne's latest album with new guitarist Gus G., is his best in years and Order Of The Black is hands down the finest album BLS has released to date.
Album opener "Crazy Horse" puts an immediate exclamation point on the band's return to form. Meaty detuned guitars drenched in a flange effect lay down the song's groove, with an occasional harmonic squeal (one of the signatures of Wylde's guitar playing) thrown in from time to time. The gonad rattling rhythm section makes its presence well known as well, with some excellent drum work here and on the rest of the album from new drummer Will Hunt (formerly of Evanescence). Wylde's raw, yet tuneful, vocal style makes up the other half of his double threat status, with a great "Iiiiiiii am!" yell during the song's chorus. A shredding solo plays out over a rhythm guitar part that cleverly throws in traces of the main riff from Black Sabbath's "Paranoid". "Overlord" follows, transitioning from a stoned-out intro to more servings of tasty meat and potatoes metal (and the amusing ragtime-style vocal outro is a cool touch). "Parade Of The Dead" kicks up the album's tempo a notch, representing possibly the best track Wylde's ever been associated with (including his Ozzy career). It's a track that demands volume (and lots of it) and you could do no better than this song in introducing a curious outsider to what best represents the band's sound. The rest of Order Of The Black's heavy tracks ("Black Sunday", "Southern Dissolution", "Godspeed Hellbound", "War Of Heaven", and "Riders Of The Damned") maintain a highly impressive level of quality. As the titles suggest, the lyrical content on these songs isn't exactly what you'd call "sunny".
It wouldn't be a Wylde album without a healthy portion of ballads, usually of the piano-laden variety. This is one aspect of the musician I've always been somewhat fascinated by, the bizarre duality of his musical side that is weighted mostly towards testosterone-fuelled metal that sees him perform live with a microphone stand adorned with a half dozen skulls on it (the Tap lives!), but rounded out by a curiously sensitive guy who isn't too much of a he-man to cite Elton John as an influence. The dichotomy is made that much more baffling when you look at the man's personality (best described, probably even by Wylde himself, as coarse white trash) and look, which has evolved (some might say devolved) over the years into something now resembling a Viking weightlifter biker. Nevertheless, there's some beautifully restrained work here on "Darkest Days", "Time Waits For No One" (better than the cliché title and lyrics would suggest), and especially "Shallow Grave", a great power ballad that manages to create gripping quiet-loud dynamic shifts without using any electric guitars on the track. Bonus tracks offered on a version of the album sold at Best Buy have Wylde performing solid stripped down versions of Black Sabbath's "Junior's Eyes" and Neil Young's "Helpless" (unaware it was a Young cover, I was thrown when I heard the opening line of the song: "There is a town in north Ontario..."). The only real dud on the album is "Chupacabra", a brief classical guitar instrumental shredathon. It's technically impressive, but will fail to have most listeners do anything but skip the track on subsequent listens to the album.
The four year gap since their last effort, Shot To Hell, definitely appears to have recharged Wylde's creative juices, and I'm guessing the turmoil in his life only added some fuel to the fire. My main criticism of BLS, if their previous few studio albums were any indication, has been that there tended to be a sameness to their sound that only grew more stale as the band took up residence in a Prince-like "quantity over quality" output territory. The BLS formula hasn't really been altered this time around, with Wylde providing a steady diet of punishing riffs, strong metal 101 vocals, and brief respites from the sonic onslaught with some ballads. As much as I try to deconstruct the songs to find out what it is about this batch that has me returning again and again, I can't come up with an answer. It doesn't feel all that different...they just have that mysterious "it" quality that makes Order Of The Black stand out as the best metal album I've heard this year.
Highlights: "Southern Dissolution", "Parade Of The Dead", "Shallow Grave", "Crazy Horse", "Godspeed Hellbound"
Lowlights: "Chupacabra"
Rating: ★★★★★★★★★☆
* Wylde plans to bring BLS back into the studio in the next couple of months, after tour commitments, to record an acoustic/unplugged version of the entire Order Of The Black album. It should see a release early in 2011.